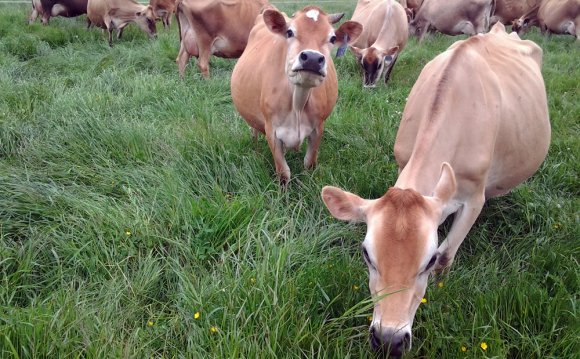 Jersey cattle are a small breed of dairy cattle. Originally bred in the Channel Island of Jersey, the breed is popular for the high butterfat content of its milk and the lower maintenance costs attending its lower bodyweight, as well as its genial disposition.

The Jersey cow is quite small ranging from only 400–500 kilograms (880–1, 100 lb). The main factor contributing to the popularity of the breed has been their greater economy of production, due to:

Castrated males can be trained into fine oxen which, due to their small size and gentle nature, make them popular with young teamsters. Jersey oxen are not as strong as larger breeds however and are generally out of favour among competitive teamsters.

Due to the small size, docile and inquisitive character and attractive features of the Jersey cow, small herds were imported into England by aristocratic landowners as adornment for aesthetically landscaped parks.

Jerseys come in all shades of brown, from light tan to almost black. They are frequently fawn in colour. All purebred Jerseys have a lighter band around their muzzle, a dark switch (long hair on the end of the tail), and black hooves, although in recent years color regulations have been relaxed to allow a broadening of the gene pool.

Jersey cattle have a greater tendency towards post-parturient hypocalcaemia (or "milk fever") in dams, and tend to have frail calves that require more attentive management in cold weather than other dairy breeds due to their smaller body mass and greater relative surface area.

As its name implies, the Jersey was bred on the British Channel Island of Jersey. It apparently descended from cattle stock brought over from the nearby Norman mainland, and was first recorded as a separate breed around 1700.

The breed was isolated from outside influence for over two hundred years, from 1789 to 2008.

Before 1789 cows would be given as dowry for inter-island marriages between Jersey and Guernsey. This was, however, not widespread.

In 1789, imports of foreign cattle into Jersey were forbidden by law to maintain the purity of the breed, although exports of cattle and semen have been an important economic resource for the island. The restriction on the import of cattle was initially introduced in 1789 to prevent a collapse in the export price. The United Kingdom levied no import duty on cattle imported from Jersey. Cattle were being shipped from France to Jersey and then being shipped onward to England to circumvent the tariff on French cattle. The increase in the supply of cattle, sometimes of inferior quality, was bringing the price down and damaging the reputation of Jersey cattle. The import ban stabilised the price and enabled a more scientifically controlled programme of breeding to be undertaken.

Jerseys are well known as curious and gentle cattle

Sir John Le Couteur studied selective breeding and became a Fellow of the Royal Society - his work led to the establishment of the Royal Jersey Agricultural and Horticultural Society in 1833. At that time, the breed displayed greater variation than it does today with white, dark brown and mulberry beasts. However, since the honey-brown cows sold best the breed was developed accordingly. In 1860 1, 138 cows were exported via England, the average price being £16 per head. By 1910 over a thousand head were exported annually to the United States alone. It is now the fastest growing dairy breed in the world.

On 1866, at the Annual General Meeting of the Royal Jersey Agricultural and Horticultural Society, H.G. Shepard notes in his history that "it was resolved - on the motion of Col. Le Couteur, that the Hon. Secretary be hereby invited to open and to carry on a "herd book" in which the pedigree of bulls, cows and heifers shall be entered for reference to all the members of the Society." In 1869 for the first time prizes were awarded at the Society's Shows for Herd Book Stock Cattle.

How to Milk a Cow