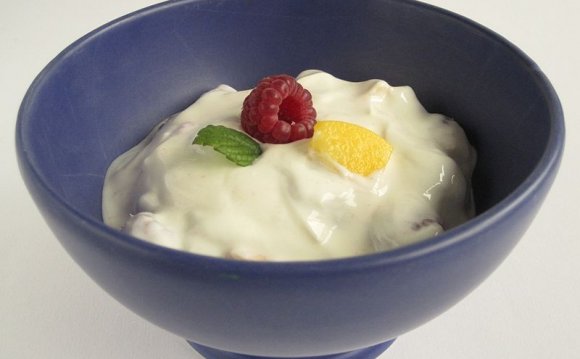 Super-thick, creamy nonfat Greek yogurt has become a highly popular product, with the benefits of a high-quality protein.

A few short years ago, Greek yogurt was a rarity on supermarket shelves.

These days, however, brands and flavors abound. The super-thick, creamy yogurt has become a highly popular product — and with good reason, says Susan Bowerman, assistant director of the UCLA Center for Human Nutrition. "It has all the benefits of a high-quality protein without the fat and without the calories, " she says.

In many ways, Greek yogurt looks like the ideal health food. A 6-ounce serving of Chobani nonfat plain Greek yogurt, for example, contains 100 calories, 18 grams of protein, 20% of the recommended daily value of calcium and 7 grams of carbohydrates. The same size serving of Dannon All Natural nonfat yogurt may have slightly fewer calories (80) and some more calcium (30% of the daily value), but it's got half the protein (9 grams) and almost double the carbohydrates (12 grams).

Greek yogurt's protein content, in fact, is probably what accounts for its skyrocketing popularity, says Barbara Davis, vice president of HealthFocus International, a market research firm based in St. Petersburg, Fla. The firm's research shows that since 2004, the number of shoppers choosing foods and beverages for their high-protein content has risen by 62%.

More shoppers are also reaching for yogurt in particular, says Harry Balzer, chief food industry analyst at NPD Group, a market research firm in Chicago. About 28% of Americans now eat some kind of yogurt on a regular basis, compared with about 14% in 2000, Balzer says.

Greek yogurt likely accounts for a small fraction of overall yogurt consumption, but increasingly, says Davis, it "fits the bill of what shoppers are looking for — high protein in a product they believe is good for them and that tastes good as well."

Both Greek yogurt and regular yogurt are made from milk fermented with live bacterial cultures. But Greek yogurt is then strained, resulting in a product that's as thick as sour cream.

The straining process means it can take as many as 4 pounds of raw milk to make a single pound of Greek yogurt, according to the makers of Fage brand Greek yogurt. That final pound is a highly concentrated source of the milk protein casein, which is considered a "high-quality" protein because it contains a complete set of the essential amino acids that the body can't make on its own, Bowerman says. Most brands of nonfat Greek yogurt contain between 15 and 20 grams of protein per 6-ounce serving.

Greek yogurt's protein content makes it a boon to vegetarians as well as dieters in search of satiating foods, Bowerman adds.

But consumers should be circumspect about other health claims. Some Web chatter has pronounced Greek yogurt easily digestible because it's low in lactose and whey. But all yogurts are low in lactose, Newman says, though she adds that the slightly lower levels in Greek yogurt compared with regular yogurt may make it a little easier for people with lactose intolerance to consume.

On the other hand, the high concentration of casein in Greek yogurt may make it difficult for people with slight milk allergies to tolerate, Newman says. Most people who are allergic to milk are allergic to casein specifically.

The ratio of casein to whey in Greek yogurt has another implication as well, Bowerman says. People using Greek yogurt to make post-workout smoothies might want to find a substitute, since whey — not casein — contains the amino acids that are crucial for muscle recovery after tough workouts.

It's also wise to read yogurt labels carefully, Newman says. Many Greek yogurts are low in fat or fat-free, but they're sold right alongside the full-fat versions, which can contain 20 grams of fat — including 16 grams of saturated fat — per serving. And while most brands of plain Greek yogurt are made from nothing but milk and bacterial cultures, flavored versions are often very high in sugar and calories. Some Greek yogurts also contain added thickeners, which consumers might not be expecting. Yoplait's Greek yogurt, for one, includes added gelatin (as well as vitamins A and D).

Frozen kefir Think yogurt, but tangier and with more ...