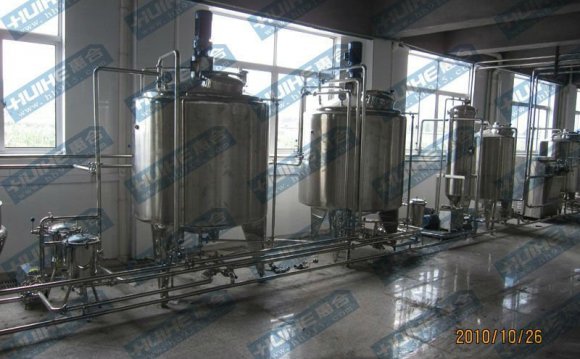 Soymilk is the base product from which all the soya-dairy foods are made. Together with its most common derivative, tofu, it is the best-known and the longest-established soyfood product. When we describe soymilk processing, we are primarily referring to a soymilk base, which is the pure soymilk extracted at the end of the process. Consumer packages of "soymilk drink" and "beverage", etc. are formulated from this base, with other ingredients, to either imitate the taste and functionality of cow milk, or to make flavored drinks such as vanilla or chocolate.

Traditional Processing of soymilk was started by the Chinese, as long as 2, 000 years ago. Today the same method, or modern variations of the same basic process, are still used in Asia and by many tofu producers in the rest of the world. This traditional method, which is also the simplest and least expensive, can be done both manually, in a simple kitchen, or by commercial equipment in a modern plant. This process has four steps:

Modern Processing methods have evolved for a number of reasons; the main one being to eliminate or reduce the "beany" off-flavor, present with traditional processing. This taste has been proven to be unacceptable to most non-Asian consumers, particularly since their use of soymilk is as a replacement for cow milk and hence a neutral, non-beany taste is preferred. The taste issue is largely due to the activity of the lipoxygenase enzyme, and the inactivation of this is one of the major objectives of modern processing systems.

Additionally, production capacity, sanitation and functional versatility (variety of flavors and other value-added products) are other factors which have determined the configuration and capability of modern systems.

Competing Methods are available for modern processing. Most modern technology is designed to:
a) eliminate or reduce the problem "beany" off-flavor and,
b) optimize yield and functionality.
These competing technologies employ various methods and principles including: hot grinding of soaked soybeans, cold grinding of soaked soybeans, hot blanching, dry bean grinding and others. With some methods, the problem flavor is controlled, but the product yield goes down. With others the result is good flavor but poor "mouthfeel" , or unsuitable functionality for other derivative foods. Finally, many major processors design either hybrids or variations of these methods, with or without their own innovations. For some consumer products, the final soymilk is "deodorized" with vacuum systems, prior to formulation and packaging.

The complexity of performance claims and the processing options are the greatest challenge to the new soymilk processor or for the upgrading of existing facilities.

Traditional vs. Modern methods is a fundamental issue facing processors, particularly those in developing countries and those who will begin production with a medium capacity in the range of approximately 200 to 300 Liters per hour. For some products, such as tofu and yogurt, it is not necessary to eliminate the beany off-flavour and so the processing line can be simpler and more cost-effective. (Essentially using the traditional method, with modern equipment.) Another factor is the kind of packaging that will be used for the finished product.

Ultimately there are a number of overlapping considerations that determine how complex a system needs to be for any given processor. However, it is safe to conclude that a processor planning to produce a "non-beany" soymilk drink, in a long-life consumer package, will have to acquire the more complex (and more expensive) production technology. Yet, even for this category, there are cost-effective solutions available and even at medium-capacity production. Ultimately, local tastes and market considerations will determine not only the kind and variety of soymilk and soya-dairy products that should be produced, but also the type and complexity of equipment and know-how required. For these reasons, a careful analysis is required that reflects the local market and financial conditions.