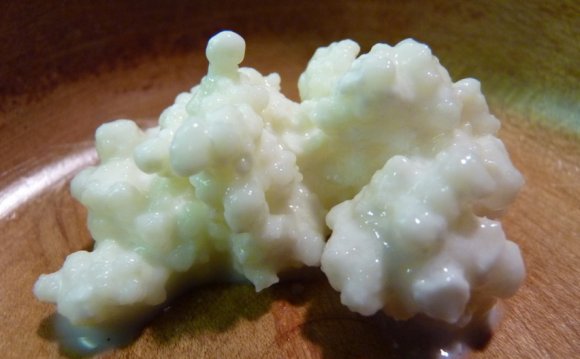 I once tried to make yogurt. It was waaaay back a long time ago, um, like two years ago or so. I decided I was going to make my own yogurt. I bought some fresh from the farm goat milk, warmed it to the right temp, played by all the rules, and then the brilliant nutritionista that I am working out that I could put it in my dehydrator to keep temp stable?

Do you know what the result was? A jar of the most disgusting soured goat milk. Reminded me of university boyfriend days when I would find such things in the boy/man's fridge on a regular basis. I have since been unable to go near animal based dairy of any kind- including yogurt. The smell just kind of does that thing to my stomach that spinny rides and too much booze does.

As if we never go on a ride or have a drink again even if the last time we partook, we yacked like engineers during frosh week. I decided that I would give it another go, this time with kefir grains in organic sheep milk. Barftastic once again. I gave up once and for all. No fermented dairy for me.

But then- last September at the Longevity Conference I sampled coconut kefir made with a kefir starter and coconut water. It was like nutritionista champagne and so bought the packet of starter. I soon realized it was not so simple. The coconut water you buy in the tetra packs has been pastuerized- therefore would not ferment properly. Somehow I just never got it together to collect a dozen coconuts for the water to make my own coconut kefir.

Last summer, the winner of the Guest Blogger Competition, did a winning post on Coconut Kefir. I was happy to let everyone love all over it, but I wasn't rushing back into the land of fermented milky stuff. But then something happened... I was out for brunch with a group of awesome town ladies who I met (and who met each other) at my 6-week cooking program in the fall. Sylvie, the woman who went from never cooking a day in her life to making her own coconut kefir, had me inspired

A bestest of a best friend decided to cleanse his candida problem once and for all and I knew that coconut kefir was just the thing to help him do it. I pulled out my box of starter, read the directions (a feat unto itself for me) and new what had to be done.

I used the Body Ecology brand of starter which, if I can tell is a collection of bacteria- many of which you would find in a good probiotic pill.

Water kefir and its benefits!