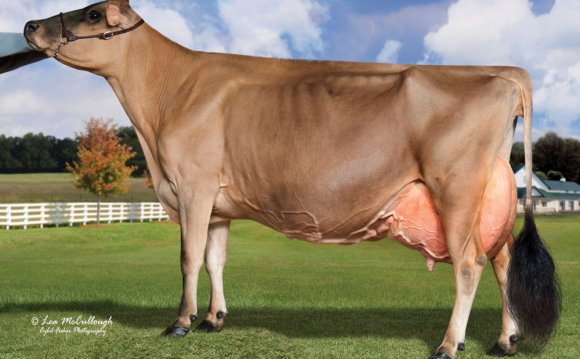 Ayrshire:The first cows of this breed were thought to have arrived in New England from Scotland's County Ayr in the early 1820's. Well adapted to rocky farms and harsh winters, the Ayrshires thrived, eventually spreading to dairy farms all across the country. Average output is 17, 000lbs./7, 711kg (~2000 gallons) of milk per 305 day-cycle/year, with 3.9% butterfat, 3.3% total protein.

Brown Swiss: Believed to have originated in the Alps of Switzerland, these hardy animals are tolerant of harsh climate and produce large quantities of milk, close behind the Holsteins.

Officially recognized as a breed in the U.S. in 1906, the first small group of cows arrived here in 1869. Though few animals were actually imported, this hasn't stopped their steady growth in number, and today, the Brown Swiss are very important members of the dairy industry. Average output is 21, 000lbs./9525kg (~2450 gallons) of milk per cycle with 4.0% butterfat, 3.5% total protein.

Guernsey: As their name suggests, these cows hail from the British Isle of Guernsey in the English Channel.

Well-bred by monks from select French Norman/Breton cattle lines (Alderneys from Normandy, Froment du Leons from Brittany), the first to arrive in the U.S. were brought by ship in 1840. Guernseys are small, about three-fifths the size of a Holstein, but produce up to 14, 700lbs./6, 350kg (~1700 gallons) milk with 4.5% butterfat, 3.5% total protein each cycle.

Holstein-Friesian: Originally bred in Northern Germany, and the North Holland/Friesland regions of the Netherlands.

These familiar black and white cows were selectively bred to make large quantities of milk from the area's most abundant natural food source- grass.

First brought to the U.S. in the late 1850's, their ready adaptibility, and economic production of large volumes of milk relative to other cows has made them common on dairies worldwide. Figures for average milk output range up to 28, 000lbs./12, 700kg (~3260 gallons) per cycle, with 2.5-3.6% butterfat, 3.2% total protein.

Jersey: Developed on Britain's Isle of Jersey, close to the Isle of Guernsey just off the coast of France. With a history as a pure breed that dates back several hundred years, they are descendants of stock from the French region of Normandy.

Milking Shorthorn: Part of the Shorthorn cattle breed originally developed for beef in Britain, descendants of these moderate producers were bred and selected for milk rather than meat. Arriving in the U.S. in 1783, the first mulit-purpose Milking Shorthorns provided the early settlers with not only milk, but meat and pulling power as well. A typical cow produces 15, 400lbs./6, 990kg (~1880 gallons) of milk per cycle with a butterfat content of 3.8%, total protein 3.3%.