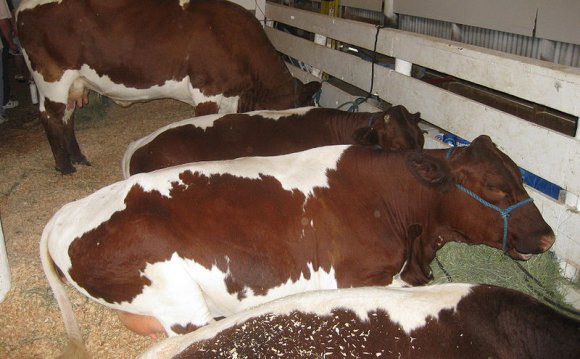 Cows produce the majority of milk in the world

“The cow is the foster mother of the human race. From the time of the ancient Hindoo to this time have the thoughts of men turned to this kindly and beneficent creature as one of the chief sustaining forces of the human race” – W.D. Hoard

Throughout history, cows have produced milk for human sustenance, (even before agriculture was developed). Today cows produce the majority of milk consumed by people. The reason why cows are the number 1 milk source in the world is because they excel at producing milk. They are masters at converting feed sources (not fit for humans), and turning it into a highly nutritious product that we call milk.

If you’ve ever wondered how much milk cows produce, you came to the right place.

The United States is one of the leading dairy producing countries in the world, and American cows are among the most productive cows in world. The average cow in the U.S. produces about 21, 000 lbs. of milk per year, that’s nearly 2, 500 gallons a year!

Interestingly, a herd of 800 cows can produce a large tanker truckload of milk each day. Over a year, that would be about 20 million lbs. of milk or 2.3 million gallons of milk.

**Productivity of the average cow in select countries. Amount of pounds of milk produced in one year**

Cows are getting better at producing milk every year. Records are being broken all the time about how much milk cows can give. It’s really quite amazing how much cows have improved over the years.

By the time you read this, there may be a new record. But in order to illustrate how much milk the top cows can give, this is an interesting story.

**The average cow produces 70 lbs. of milk per day, or about 8 gallons. Compare that to a top record holding cow that produces 23 gallons per day**

The amount of milk produced by dairy cows can be affected by a wide variety of variables. The key to dairy farming successfully is to minimize the impact of these variables. The following are some things that impact milk production:

On our farm, we use technology to track our cow’s milk production daily. The milking machine will record each cow’s milk output in real-time. Through the system, we can determine which cows are the top producers and which are the low producers.

This knowledge helps us feed the cows better. By understanding the cow’s milk output, we can group them accordingly and feed them according to their dietary needs. If a cow is producing a large amount of milk, we can feed her more energy and nutrients to support that milk production. If a cow is not producing much milk, we can feed her less energy or she will gain too much weight.

Knowing the cow’s milk production allows us to take better care of the cows.

Through breeding, dairy farmers have been able to greatly improve the amount of milk that cows give. A cow today is 10 times more productive than a cow in the past.

In 1944, there were 25.6 million cows in the United States, while today there are only 9.3 million cows in the U.S. that produce 59% more milk than in 1944. Cows have increased in production so significantly, that it has allowed there to be a reduction of animals to support the milk needs of the U.S.

While dairy cows have gotten very good at producing milk, dairies are also breeding their cows to last longer. Dairy farmers want cows that not only produce a lot of milk but a cow that will last a long time. It’s interesting, but when you breed for a balanced cow – with a strong frame and good feet and legs – milk production tends to follow. Dairy farmers realize this, that’s why one of the most important criteria for selecting bulls is longevity.

Do you have more questions?

Did I answer your question about milk production. Let me know in the comments below

How to increase Milk Production in Dairy Cows | Raithe Raju

The Genetics of Milk Production in Dairy Cattle