Too much milk production 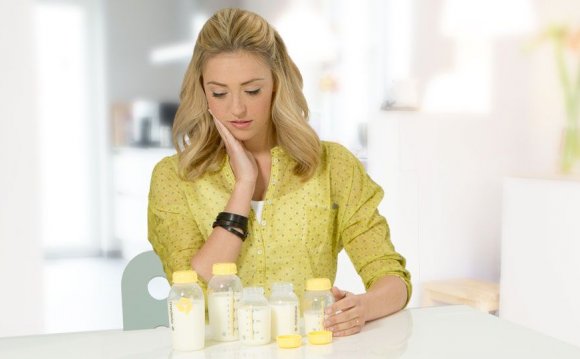 Sometimes a mother can make more milk than her baby needs. While having too much milk may seem like a good problem to have, the rush of milk from an overfull breast can make feedings stressful and uncomfortable for both mother and baby. Babies can also be very fussy in between feedings when there is too much milk.

Most babies whose mothers have too much milk gain weight much faster than normal and have many more wet and soiled diapers than normal each day. (See How can I tell if my baby is getting enough milk? for information on normal weight gain and diaper output.) Higher than normal weight gain is absolutely fine for an exclusively breastfed baby as long as he is generally happy and feeding easily. It is only a problem when either the baby or his mother experiences difficulties as a result of having too much milk.

Some babies whose mothers have too much milk actually do not get enough milk because they have trouble handling the strong flow and can't breastfeed easily. These babies need supplementary feedings (preferably with their mothers' expressed milk) until their mothers' milk supply can be adjusted to better meet their needs.

When a mother has more milk than her baby can handle, the following behaviors may be common:

If many of these experiences seem familiar to you, it may be because you have an overabundant supply of milk, which can cause a forceful milk ejection (sometimes referred to as overactive let-down), and/or foremilk-hindmilk imbalance.[1][2] The infant behaviors described above are caused by these issues but may frequently be misdiagnosed as colic, lactose intolerance, milk protein allergy, reflux, or hypertonicity (stiff muscle tone).

If you are experiencing oversupply, a forceful milk ejection, or foremilk-hindmilk imbalance, the strategies described below may greatly improve your breastfeeding experience. Fortunately, many mothers find that oversupply naturally adjusts to a more manageable level by the end of baby's third month.

Why Does Oversupply Happen?

There are several reasons why a mother may produce too much milk. Some mother's bodies are very enthusiastic and they seem to overproduce milk from the very beginning. In other cases, the oversupply may result from following breastfeeding management advice that unintentionally increased milk production. This is especially likely to happen if a mother routinely pumps a significant amount of milk before nursing to slow down the flow in order to make it more manageable for baby. She may accomplish the immediate goal, but end up with a chronic problem as a result. Another cause can be routinely switching baby to the other breast before he has finished the first breast. This can happen when mothers feed only a certain amount of time on each breast or when they are trying to find a side that the baby doesn't fuss on. Some mothers' breasts are highly sensitive to stimulation, and switching back and forth without ever draining a breast well can result in production of too much milk in both breasts.

Oversupply problems are frequently created by cultural beliefs about how breastfeeding should happen, which mothers read in books and online, or hear from well-meaning friends, family, or health care providers. A mother may have been told she must nurse a certain number of minutes on each side or that baby must take both breasts at every feeding. Yet, for the mother with an abundant supply, baby may naturally fill up so fast on one breast that she finds herself cutting him off very early in order to get him to still accept the second breast. He is taken off the breast before he gets to the creamier milk, and then fills up on foremilk from the second breast. Large feedings of lower calorie foremilk create a self-perpetuating cycle: baby's tummy feels distended and uncomfortable from the feeding, yet he still feels hungry because he did not get enough milk fat to satisfy him. So baby cries to feed again, and mother concludes that he must not be getting enough milk because he never seems content.

A further problem may also result from this unintentional mismanagement. Foremilk is high in lactose, a normal and necessary milk sugar that in large volumes causes gassiness and discomfort, frequently with green, watery or foamy stools. Over a period of time, undigested lactose can irritate the lining of the intestines, causing temporary secondary lactose intolerance and possibly small amounts of bleeding into stools that can be misdiagnosed as a food allergy. Adjusting breastfeeding to increase the amount of fat the baby receives ("finishing" the breast before switching) usually corrects the problem. For a more thorough discussion of foremilk, hindmilk, and lactose, see our Foremilk, Hindmilk, and Lactose FAQ.