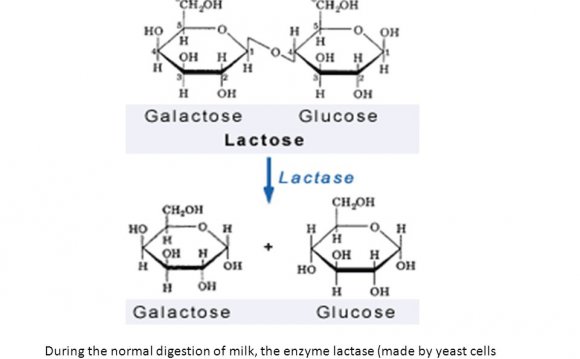 Enzyme activity increases with an increase in temperature and usually doubles with every 10 degrees rise. This is due to the molecules moving faster and colliding more often together. However at a certain point the temperature gets to high and the enzymes denature and stop functioning. This is due to the heat causing vibrations within the enzyme destroying its structure by breaking the bonds in the enzyme.

Enzymes usually have an optimum pH at which they work most efficiently. As the pH diverges from the optimum, enzyme activity decreases. Both acid and alkali environments can denature enzymes.

Denaturation is changing the structure of an enzyme (or other protein) so it can no longer carry out its function.

Lactose is the sugar found in milk. It can be broken down by the enzyme lactase into glucose and galactose. However some people lack this enzyme and so cannot break down lactose leading to lactose intolerance. Lactose intolerant people need to drink milk that has been lactose reduced. Lactose-free milk can be made in two ways. The first involves adding the enzyme lactase to the milk so that the milk contains the enzyme. The second way involves immobilizing the enzyme on a surface or in beads of a porous material. The milk is then allowed to flow past the beads or surface with the immobilized lactase. This method avoids having lactase in the milk.