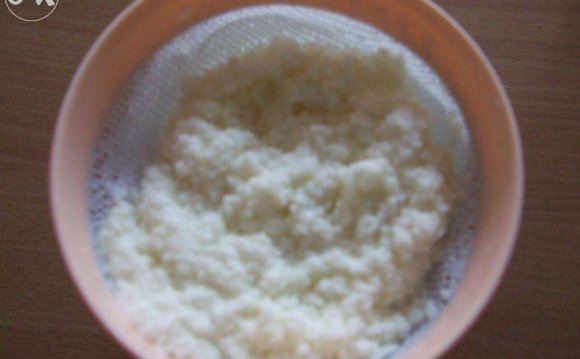 Kefir is a milk-based beverage that is made by fermenting milk (goat, cow, sheep) with kefir grains and is rich in both enzymes and beneficial bacteria. This beverage is made with the kefir culture, and this culture is more commonly referred to as a “grain.” Kefir “grains” are comprised of lactic acid bacteria, yeasts, and polysaccharides. The live bacteria and yeast found in kefir grains are friendly microorganisms that not only aid the digestive system but also help strengthen the intestines and resist the growth or harmful bacteria or pathogens. “Kefir has a uniform creamy consistency, a slightly sour taste somewhere between buttermilk and sour cream, and a mild yeasty aroma. Kefir may have small amounts of carbonation and alcohol. It can be enjoyed plain or sweetened to taste.”(1)

It has been suggested that kefir is an “an almost ideal probiotic dairy product.”(2) This is in part due to the fact that “Kefir contains several major strains of friendly bacteria...[such as] Lactobacillus Caucasus, Leuconostoc, Acetobacter species, and Streptococcus species. It also contains beneficial yeasts, such as Saccharomyces kefir and Torula kefir.”(3) Furthermore, “among the yeasts Saccharomyces delbruecki, Saccharomyces cerevisiae have been identified and the bacteria Lactobacillus kefir and members of the Streptococcus genera have also been isolated in kefir grains. The polysaccharide that makes up the mass of the kefir grain has been shown to be unique and has been given the name kefiran.”(4)

Kefir has been used for many generations and is believed to have originated in the Northern Caucasus Mountains. The Caucasus Mountain system is located in Eurasia between the Black Sea and the Caspian Sea. It has been stated that “in November 1881 the German naturalist Eduard Kern reported to Botanic Society in St. Petersburg about a mysterious beverage, which was exclusive common to the higher regions of the Caucasus and said to assure the inhabitants of this area good health and a very long life expectancy.”(5) This beverage was kefir, and from that time studies have been conducted to determine the health benefits of kefir.

It is thought that the consumption of kefir can have many positive health effects on the body. For instance, “Research conducted by East European institutes has proven that there is something to the reputation of kefir. In Rumania where research has been carried out by Professor Dr. Asian on the causes of old age, the effect of kefir on prolonging life is being studied.The general opinion is that the life-prolonging effect is to be attributed to certain components of the kefir grains.”(5) It is also reported that kefir may positively effect the following: the functioning of [the] liver, gallbladder, circulation, heart activity, metabolism, oxygen supply to the cells, [and] blood circulation to the brain [may] improve and stabilize.”(5)

“[Japanese researchers] have carried out a series of animal feeding trials that showed that kefir and kefir grains can slow down or reverse the growth of a wide variety of cancers...[and] other researchers have started to try to identify what component of the kefir grains may be responsible for its cancer fighting properties.”(4) This could be due to the fact that the “ingestion of viable probiotics or prebiotics is associated with anticarcinogenic effects.”(6)

Additional studies show that fermented dairy products, such as kefir, may help lower cholesterol levels. One such study indicates that “fermented milk has been shown to cause an increase in human gut bacterial content. These bacteria, once resident in the large intestine, are believed to ferment food-derived indigestible carbohydrates. Such fermentation causes increased production of short-chain fatty acids, which decreases circulatory cholesterol concentrations either by inhibiting hepatic cholesterol synthesis or by redistributing cholesterol from plasma to the liver.”(7) In other words, “existing evidence from animal and human studies suggests a moderate cholesterol-lowering action of fermented dairy products”(7)

Kefir and yogurt are both fermented dairy products; therefore, this may lead some to assume that kefir and yogurt both offer the same health benefits. However, this is not the case. “[Kefir] contains different types of beneficial bacteria [than does yogurt]. Yogurt contains transient beneficial bacteria that keep the digestive system clean and provide food for the friendly bacteria that reside there. But kefir can actually colonize the intestinal tract, a feat that yogurt has not substantiated. [In addition], Kefir contains several major strains of friendly bacteria not commonly found in yogurt (e.g. Lactobacillus Caucasus, Leuconostoc, Acetobacter species, Streptococcus species, Saccharomyces kefir and Torula kefir).”(3)