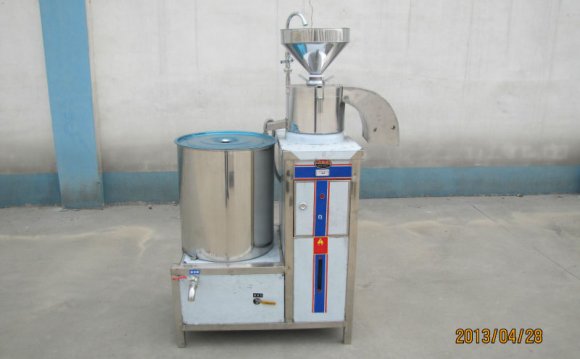 It's very easy to make soy milk at home. If you make soy milk on a daily basis you might find an automatic soymilk maker (also called soy milk machine) such as Soyajoy, Soylife, Miracle, Soyquick, Soyawonder or Vegan Star very helpful.

You need about 125 g whole soya beans to make 1 liter of soy milk.

Clean the soya beans and soak them in water for 10 - 16 hours. Although not necessary, you can remove the hulls be kneading the soya beans and flushing the loose hulls with water. Removing the hulls makes the extraction process more efficient. An alternative is to crack the soya beans before soaking. The hulls come loose easily and can be washed away. When you use cracked soya beans you need less soaking time: 6 - 8 hours.

Heating the soya beans will destroy enzymes which are responsible for the development of beany flavour. This heating can best be achieved by microwaving the wet soaked soya beans during 2 minutes.

Grind the soaked soya beans and 1 liter water in a blender. Sieve the mixture trough a cheese cloth and recover the soy milk. The insoluble material which remains on the sieve is called okara, and can be used as an ingredient for bread making or as cattle feed.

Heat the soy milk till boiling point and continue boiling for about 5 to 10 minutes. After cooling, the soy milk is ready and can be kept in the fridge for another 3 days.

The soy milk can be drunk as such but taste can be improved by adding some salt (also cow milk contains a lot of salt).
With soy milk you can easily make your own fruit smoothie. Fruit smoothies are very healthy because they contain soy milk and a lot of fresh fruits.
Source: www.soya.be

Video: The Soy Process. From plantation, to soymilk.