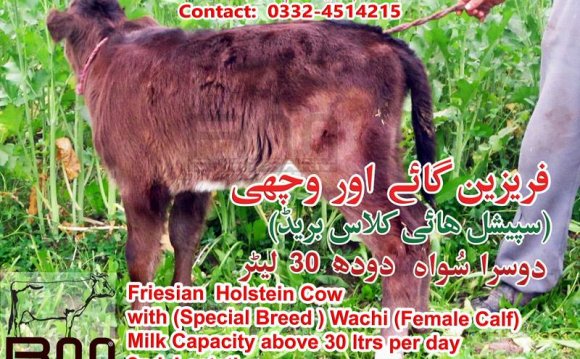 The average daily milk production per Holstein cow with decent nutrition and feeding management practices should be a minimum of 60 pounds of 4% fat corrected milk. Herds with good nutrition and feeding management practices should maintain an average of 70 to 80 pounds or more of 4% fat corrected milk. The average peak milk production for first calf heifers normally is around 7 to 14 pounds over average daily production for the lactation. Second lactation and older animals usually produce 15 to 30 pounds over average daily milk production. There is a greater differential at higher levels of production. Most mature cows and heifers will peak within 5 to 10 weeks after calving. The use of BST may result in peaks at about 90 days with a high plateau from 60 to 150 days in milk. After animals have reached peak milk production, the average decline in milk per month generally is 10 to 15% for most of the lactation. Herds that are well managed and well fed may experience lower declines. In late lactation, cows may experience a 12 to 20% decline. Lactation graphs can be used to determine any variations from expected. A normal lactation length for cows is 290 to 310 days with an average length of 296 days. A short lactation length is anything less than 270 days.

Evaluate the herd for a high incidence of subclinical or clinical mastitis.

Check individual milk samples from all milking cows using CMT or DHIA-SCC. The average somatic cell count should be under 300, 000. In the whole herd, 10% or less of the cows should have a positive 2 or higher CMT on a composite of four quarters or positive 3 in one or more quarters on quarter samples. At least 70% of the cows on a somatic cell counting program should show a linear score of 1 and 2. Teat end health may be a problem if more than 20% of the teats show evidence of erosion, eversion, cuts, or sores.Milk production for the herd may be reduced by as much as 25 to 50% in a few weeks time with a high incidence of clinical and subclinical mastitis. Check both the milking system and milking practices. Culture milk samples and run sensitivity tests when warranted.

100 litre milk per day from one cow