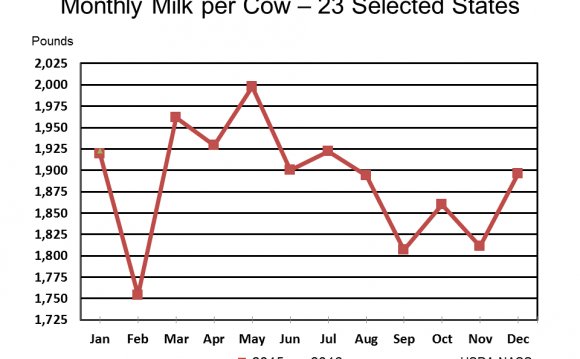 Farms across the EU-28 produced approximately 164.8 million tonnes of milk in 2014, of which 159.6 million tonnes (or 96.8 %) were cows’ milk. Milk from ewes, goats and buffalos represented 3.2 % of the total production. The majority of the milk produced on farms was delivered to dairies and the remaining amount was used on the farms (see Figure 1).

Average yields of milk per cow varied considerably between regions of the EU Member States in 2014. The apparent yield was highest between 8 400 kg and 9 600 kg per cow per year in the most productive regions of Italy, Denmark, Finland and Sweden. By contrast, the apparent yield was relatively low between 2 750 kg and 3 600 kg per head in the most productive regions of Romania and Bulgaria, where milk production was typically less specialised.

The diversity of landscapes and climatic conditions within some EU Member States often helps explain regional specialisations as regards dairy farming pasture, which is generally grown in lowland areas with a temperate climate.

Cows’ milk production on farms in 2014 was highest (across NUTS 2 regions of the EU) in Bretagne (France), Southern and Eastern Ireland and Lombardia (Italy), reaching 5.59, 4.64 and 4.63 million tonnes respectively (see Table 1). Southern and Eastern Ireland (with 896 thousand head), Bretagne (France) (with 751 thousand head), Mazowieckie (Poland) (with 489 thousand head) and Lombardia (Italy) (485 thousand head) recorded the highest number of dairy cows in 2014. Note that each NUTS 2 region has a different land area and that the count of animals is influenced to some degree by the size of each region, as well as the propensity of certain regions to specialise in dairy farming. Note also that the data on the numbers of dairy cows for Germany and the United Kingdom are only available for NUTS 1 regions (which cover larger areas of land).