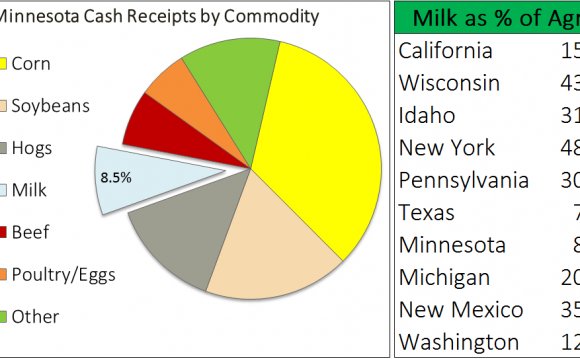 WASHINGTON — California continues to lead the U.S. in number of milk cows and overall milk production.

According to Service Feb. 21, California milk producers had just under 1.8 million head of dairy cattle as of January 2014, with total production of 3, 624 million pounds, up 4.7 percent from a year earlier.

Rounding out the top 10 in cow numbers are: Idaho, Pennsylvania (531, 000 head and 908 million pounds), Minnesota, Texas, Michigan, New Mexico, and Ohio and Washington tied for 10th.

Milk production in the 23 major states during January totaled 16.1 billion pounds, up 1 percent from January 2013. The daily production per cow averaged 61 pounds in January.

Dairy herds in Ohio produced 461 million pounds of milk during January, down 1.3 percent from a year ago, according to Cheryl Turner, state statistician of the USDA’s National Agricultural Statistics Service Ohio field office. The daily production per cow was 55.6 pounds, unchanged from January 2012.

Up-to-date agriculture news in your inbox!