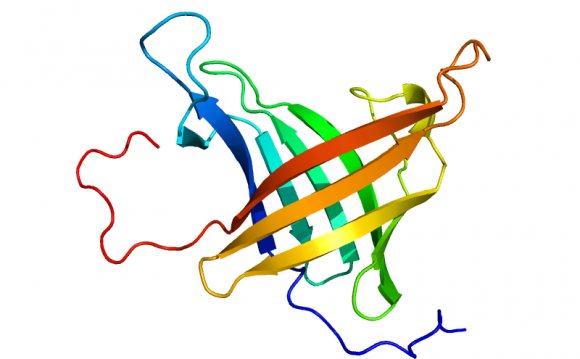 About A1 and A2 beta-casein in cow’s milk:

Following the 2007 release of the book Devil in the Milk by Keith Woodford, there has been growing concern expressed by the general populace about A1 and A2 beta-casein content in milk.
Milk is about 85% water. The remaining 15% is the milk sugar lactose, protein, fat, and minerals. The protein portion is 80% casein and 20% whey. Whey does not coagulate or make a curd as the milk acidifies. Beta-casein is 30% of the total protein content in milk, or about 30% of the total protein content in cow’s milk.
A2 beta-casein is the beta-casein form cows have produced since before they were first domesticated, over 10, 000 years ago. It is considered safe and nutritious and has no known negative effects on human health. Sometime in the past few thousand years, a natural mutation occurred in some European dairy herds that changed the beta-casein they produced. The gene encoding beta-casein was changed such that the 67th amino acid in the 209 amino acid chain that is the beta-casein protein was switched from proline to histidine. This new kind of beta-casein that was created is known as A1 beta-casein, and is generally more common in many of the big black-and-white cow breeds of European descent such as the Holstein and Friesian. Due to their size, milk production, and demeanor, these breeds of cow are used to produce the vast majority of Northern Europe and America’s milk.
Each cow carries two copies of the gene encoding beta-casein, with a genotype of A1/A1, A1/A2, or A2/A2. Neither the A1 nor A2 trait appears to be dominant, which means that the milk produced by an A1/A2 cow will likely contain equal proportions of A1 and A2 beta-casein. A1/A1 cows will obviously only produce A1 beta-casein, just as A2/A2 cows will only produce A2 beta-casein. While each dairy herd is capable of being quite different from average, a broad characterization of the A1 or A2 genetics of breeds can be made. Northern European black-and-white breeds such as Friesian Holstein usually carry A1 and A2 alleles in equal proportion. Jersey cows and other Southern European breeds probably have about 1/3 A1 and 2/3 A2 genetics. Guernsey cows generally have about 10% A1 and 90% A2 genetics.
The cause for concern with milk containing A1 beta-casein is that the 67th amino acid switch from proline to histidine readily allows a digestive enzyme to cut out a 7 amino acid segment of the protein immediately adjacent to that histidine. When proline is present in that location (as it is in A2 beta-casein), that same segment is either not separated at all or the separation occurs at a very low rate. The 7 amino acid segment that is separated from A1 beta casein is known as beta-casomorphin-7, often abbreviated as BCM-7.
BCM-7 is the real “devil” in A1 milk for a number of reasons. It is an exogenous (doesn’t naturally occur within the human body) opioid that interacts with the human digestive system, internal organs, and brainstem. While no direct causal relationships have been demonstrated between BCM-7 and these diseases due to a wide range of contributing factors for each illness, BCM-7 has been linked to type 1 diabetes, heart disease, autism, and other serious non-communicable diseases as well.

The good news and looking forward:

Snowville Creamery milk comes from a large variety of mixed breed dairy cow herds including a mix of Jersey, Guernsey, Brown Swiss, milking shorthorn, Friesian and others. Based on the assumptions about typical A1 vs. A2 population genetics of these breeds, we assume that Snowville Creamery milk products contain significantly lower amounts of A1 beta-casein than most other milk products sold in the same stores. However, we have not yet gone to the effort and expense to conduct A1 vs. A2 beta-casein genetic makeup screening.
We at Snowville Creamery learned about the A1/A2 issue by reading Keith Woodford’s Devil in the Milk. We recommend you at least check out his website. Unfortunately, the costs to conduct genetic testing to assist in breeding for all A2 beta-casein-containing milk were prohibitively expensive. That has changed. We have located a veterinary genetics laboratory that can conduct A2 genotype screenings at an affordable price, and are in the process of working with our producers to obtain DNA samples from a representative population of each herd. We are very excited for this opportunity to start selectively breeding for A2 dairy herds and to steadily decrease the amount of A1 beta-casein in our delicious fresh milk products.
It takes roughly two and a half years for a newborn calf to grow up, have a calf of its own, and begin producing milk, so this kind of progress occurs over a multiple-year timeframe. Assuming our average cow is already 50% A2, if we can help our producers to achieve two successive generations of selectively breeding with only A2/A2 bulls it is likely that a herd could reach 100% A2 genetics in as little as five years. However, the final step to get from mostly A2 to completely A2 will require testing the entire herd and selling off all carriers of the A1 beta-casein allele.
This is yet another example of Snowville Creamery’s wholehearted commitment to continuous improvement in providing you, our customers, with the freshest, tastiest, healthiest milk we possibly can. You are who we care about most!
Source: www.snowvillecreamery.com

Do You Really Need Whey or Casein Protein Supplements ...

A1 Beta Casein Is Even More Toxic Than Gluten