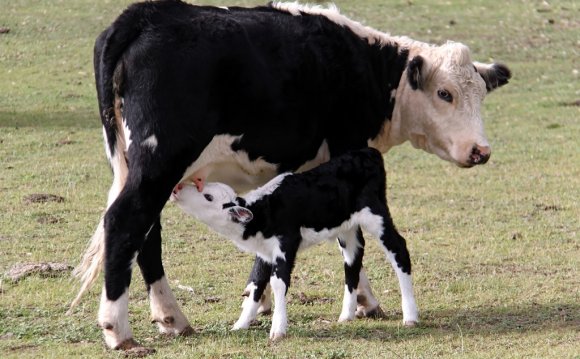 The dairy industry spends a lot of money on advertising, to convince us that the breastmilk of a cow is healthy for us. And cows need to be milked anyway, right?

Do Cows Need to be Milked?

Cows are mammals. Just like other mammals, when a cow has a baby, her body will make enough milk for her baby. In a normal situation, cows don't need any help getting rid of too much milk. The goal of the dairy industry however, is to make as much money as possible. They have several commonly used methods to get cows to produce more milk:

Most cows in the dairy industry are given growth hormones, causing their udders to become unnaturally big and heavy, resulting in frequent infections. The Bovine Growth Hormone (BGH) also increases birth defects in calves.

The average modern dairy cow will produce about 100 pounds of milk per day, which is 10 times more than she would naturally produce.

A cow produces the most milk around 40 to 60 days after she's given birth. She's then impregnated again, after which her milk production will slowly decline, until she's "dried off" and stops producing at about 305 days after calving. About a month later she will give birth again and a new cycle will begin. Some cows are kept for about 10 cycles, but the large majority of dairy cows are slaughtered after only 3 or 4 cycles. Normally, cows live 18 to 22 years.

Cows being milked by machines.

What Happens to the Calves?

After being removed from their mothers, most calves are fed a commercial milk replacer, which is based on dried milk powder.

Veal calves are generally loaded onto trucks and sold at auctions.

Veal calves are confined in crates measuring about two feet wide. To make their meat more "tender", their movements are restrained by chains around their necks. To give a white color to their meat, the calves are fed an all-liquid milk-substitute, purposely deficient in iron and fiber. After about 16 weeks, these poor calves are slaughtered and their meat is sold labeled as "white" veal. "Bob" veal comes from calves who are slaughtered when they are only a few hours or days old.

Ceal calf in a crate.

Cow in head stall at the Horizon Organic Dairy Farm.

Like any other industry, the organic dairy industry has to make a profit. Even at organic dairy farms, cows are kept constantly pregnant, calves are removed from their mothers and male calves are turned into beef or veal.

Especially at larger organic farms, the treatment of the animals very much resembles that of factory farmed animals. There are very few regulations in place that deal with the amount of space the animals should be given or the amount of time they should be allowed outside.

Definitely! It is very healthy food for calves, who have to grow into big cows. Dairy is high in fat, protein and cholesterol. It is low in carbohydrates and contains no fiber.

Should humans be consuming it? Absolutely not! There is no need at all for humans to be consuming the breast milk from another species.

"There is no reason to drink cow's milk at any time in your life. It was designed for calves, not humans, and we should all stop drinking it today."

Mother with her baby.

Dairy products are in fact one of the leading causes of food allergies. They contain more than 25 different proteins that may induce allergic reactions in humans. Lactose intolerance is the inability to digest the carbohydrate known as lactose found in milk. This condition causes symptoms like diarrhea, gas and stomach cramps.

Lactose intollerance is common in about 33% of people. Asians have the most trouble digesting lactose (90%), followed by African-Americans (75%). Dairy has also been found to be a cause of colic in babies.

"Everybody Hurts" by R.E.M. Inspires Dairy Cows to Produce ...