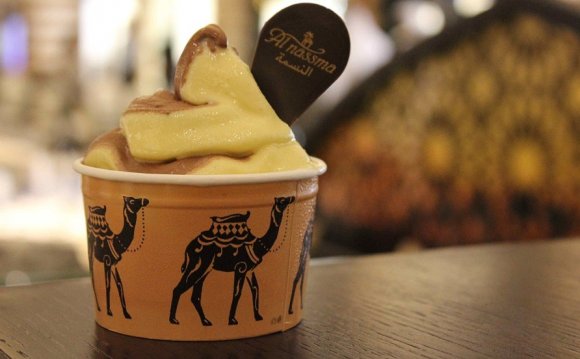 Your favorite desert creature is making its way to the dairy case.

California-based Desert Farms has launched what it calls the first commercially available line of camel milk products, including raw and pasteurized camel milks and a raw camel milk kefir (a fermented drink).

The company is touting the health benefits of camel milk, saying it provides “more absorbable calcium than available in other milks” and it “may enhance diabetic wound healing, ” among other benefits. But it’s also saying camel milk is simply a milk for our times — “richer, more filling, more easily digested, and more satisfying than cow, goat or dairy milk.”

And the pitch is apparently working: The product line is already being featured in more than 40 Whole Foods stores throughout California and is starting to be distributed elsewhere. And that’s in spite of the fact it doesn’t come cheap — a pint of Desert Farms camel milk runs $18.

“It’s the closest milk to a human mother’s milk…People are willing to pay a premium, ” says Walid Abdul-Wahab, the entrepreneur behind Desert Farms.

In many ways, Abdul-Wahab’s company is simply capitalizing on a trend that’s already been building. For starters, camel milk has long been popular in the Middle East and other parts of the world (think places where the land is too dry to support cattle farming). More recently, the milk has spread to the United States, particularly via Amish farmers who tend to small camel herds and sell the milk through cooperatives. (Abdul-Wahab sources his milk from such farmers.)

But Abdul-Wahab isn’t the only entrepreneur who sees the potential of these hump-backed animals. Another major player is Frank King, a chiropractor and founder and president of King Bio, a North Carolina company that specializes in homeopathic medicines and other natural products. After successfully marketing bison meat as a leaner alternative to traditional beef, King is now looking to camels (he’s got a herd of 23) and the milk they provide. He also talks of its healing properties, pointing to research that has shown the milk can help those with conditions ranging from autism to hepatitis.

“It’s the next superfood, ” says King.

Amazon is rolling out a music-streaming service, but with some limitations.

And it’s a tasty one, too, he says. Like other camel milk connoisseurs, he describes it as having a slightly saltier taste than cow milk. “As well as a hint of vanilla, ” he says. (In a MarketWatch taste test of the Desert Farms milk, the saltiness was definitely there. “It tastes like someone left a pretzel in a glass of regular milk, ” one colleague said. But the vanilla? Not so much.)

While King says he’s motivated to promote camel milk because of its health benefits, there’s clearly money to be made. Alternatives to cow milk — soy, almond, etc. — have become considerably more popular in recent years, with sales climbing by 30% since 2011 to billion, according to Mintel, a market researcher. Meanwhile, even with all those “Got milk?” ads, consumption of cow milk (and cream) has been on a steady decline for the past few decades — from a per-capita consumption of 273.8 pounds in 1970 to 198.8 in 2012, according to the USDA. The main reasons for the decline? The USDA says “competition from other beverages — especially carbonated soft drinks, fruit juices, and bottled water — is likely contributing to the changes.”

But the camel milk industry — if it can be called that just yet — likes to position camel milk as a truer alternative. “Milk comes from mammals. It doesn’t come from fruits or vegetables or nuts, ” says Abdul-Wahab. And while pricing might be a turnoff to some consumers, Abdul-Wahab and others note costs could come a bit down as America’s camel population — currently, a mere 5, 000 — rises over time.

Plus, camel milk may have another factor in its favor — namely, the novelty aspect. “Camels are just so darn exotic, ” says Louise Kramer, a spokesperson for the Specialty Food Association, a trade group that represents the $88 billion gourmet products industry.

Still, some say they’re not likely to jump on the camel milk bandwagon (er, caravan) — partly because of cost and partly because they’ve grown somewhat suspect of the gourmet and superfood trends.

In that regard, Brian J. O’Connor, a personal finance expert who’s written about how to save on groceries in his “$1, 000 Challenge” book, says that when he heads to the supermarket, he’s simply looking for garden-variety cow milk, not some pricey, nouveau alternative like camel milk.