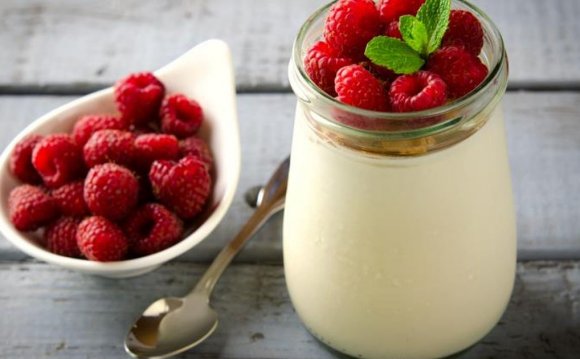 Milk has been used to produce fermented milk products as far back as 10, 000 B.C. in different regions all over the world. The many benefits of fermented milk products include enhanced digestibility, new and unique flavors, added probiotics, vitamins and minerals, and preservation products for a food that normally has a very short shelf life.

The processes used to turn milk into different fermented foods involves adding lactic-acid-producing microorganisms, such as bacteria and yeast, which ingest lactose, or milk sugar, and release lactic acid as waste. This result is a rise in milk acidity, which allows the production of kefir, yogurt, cheese and sour cream among other fermented foods.

Kefir is a fermented yogurt-like drink that dates back centuries to the shepherds of the Caucasus Mountains. The word "kefir" is derived from the Turkish word “Keif, ” which means "good feeling"; a benefit this drink is said to provide for those who consume it. Kefir is produced with starter grains, known as kefir grains, which contain active microorganisms consisting of 83 to 90 percent lactic acid bacteria and 10 to 17 percent yeast. Kefir incorporates various essential vitamins, minerals, amino acids and enzymes, particularly phosphorus, magnesium, calcium and vitamins B2, B12, D, K and A.

A staple of the Middle Eastern diet for thousands of years, yogurt is a fermented food that holds the same level of protein and fat as the milk from which it is produced. It is also a source of calcium and vitamins B2, B6 and B12. Yogurt, like other fermented milk products, is primarily cultured from cows milk, but can be made from goat's milk. Microorganisms can also be used to ferment non-dairy milks, including coconut milk, almond milk and soy milk, into yogurt.

Cheese may be the most popular fermented milk product, using more than one-third of all milk produced in the United States each year for its production. Both soft and hard cheeses are produced by culturing milk for an extended period of time. Certain types of cheeses can be made simply by straining the moisture out of sour cream or yogurt. Some other types of cheese, however, require additional steps in the culturing and fermentation process. Over 2, 000 varieties of cheeses exist, with some of the most notable being cheddar, feta, cream, goat and blue.

The original process for making sour cream was to simply let cream sour on its own. Today, a more proactive process is used: the lactic-acid-producing bacteria Streptococcus lactis. The flavor of sour cream is mild and tangy and the texture is thick and smooth. With a fat content somewhere between 10 to 14 percent, sour cream has significantly fewer calories than mayonnaise - a food sour cream can replace in many applications. Sour cream also works well in baking recipes for cookies cakes, breads and pies.