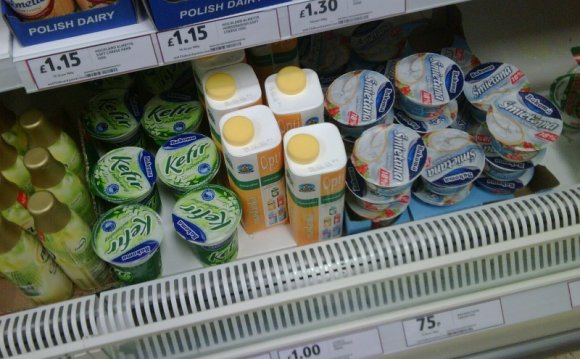 My previous blog was about milk and included my thoughts on clever marketing ruling the food industry, and great products often not getting to market. Here is an example; In the UK the probiotic drinks market is has gone from zero in 1980 to over £100m last year. Whereas the better ‘kefir’ is almost unheard of.

I have some milk Kefir grains growing in my fridge and have the yogurt every other day with my home made muesli. I am convinced it makes a difference to my health and have not had a cold or flu for 3 years! Anyway the here is everything you need to know about Kefir, the real probiotic:

First things first: what is it? Kefir—pronounced “keh’-feer”—is a fermented drink originating from the Caucasus Mountains that belongs to the category of probiotic supplements. It’s claimed to have been discovered when shepherds found the milk in their leather pouches changing in taste and flavour over long storage.

The drink is thus very similar to yoghurt in its creation and taste. Where it does deviate from yoghurt is in the benefits it carries: yoghurt typically carries 2 bacterial strains; kefir, on the other hand, carries up to 40.

And in this case, more bacteria is a good thing. While some of us may have knee jerk aversion to the very word “bacteria”, not all microorganisms are harmful. In fact, some are essential. Humans in themselves are microbiomes. That is, we’re collections of microorganisms that belong to and are necessary for each system’s (each human being’s) continued life.

This is why antibiotic usage in medicine is prescribed in moderation: while antibiotics can kill harmful bacteria, their overuse may have an impact too on the good microbiota.


Many digestive upsets and diseases have been diagnosed to be symptomatic of bacterial denudation due to antibiotics. In other words, they were caused by imbalances in the body’s bacterial population. Kefir, even more than yoghurt, can be beneficial in such cases. It can help to repopulate and regain balance of the bacterial communities within our digestive systems and can also supply added vitamins such as Vitamin K and B, along with other minerals.

There are 2 kinds of kefir that can be purchased nowadays: water kefir and milk kefir. The latter is obviously the traditional option, where the bacteria in the culture use milk sugars as their food/fuel. The former is for those who want a non-dairy version of the kefir bacterial culture: here, the bacteria’s food is plain sugar.

The taste of kefir depends on the type you make and how long it spends fermenting. Longer fermentation results in sourer tastes. Both water kefir and milk kefir are acidic, although the latter is generally considered more yoghurt-like (it is dairy-based, after all). Water kefir also has a pleasant touch of effervescence to it — this can be increased by storing the drink in airtight containers after fermentation.

Both are very often mixed with other foods for added flavouring as well as to reduce the sourness of the beverage. Adding another source of sugar to the kefir gives the bacteria something else to eat, after all, so more of the sugars are left intact from the original mixture when this is done.

This may explain why so many people prefer to mix kefir with sugar-rich foods: fruits are popular additives to the drink, especially as the resulting beverages are often slightly lemony and thus make rather bright-tasting fruit drinks or shakes. But before using the kefir as a component of any drink or food, you have to ferment it first. Here are the steps to preparing both water and milk kefir: Note: Don’t let the kefir come in contact with metal. Use very clean, soap-free glass and plastic implements. Avoid honey as well, which is antibacterial.

WATER KEFIR
Step 1: Get a tablespoon of hydrated water kefir grains (strain them if they are dripping) for every cup of water you want to add and put it in a jar.
Step 2: Add one tablespoon of white sugar to the jar for every tablespoon of kefir grains. You may also add a quarter of a cup of fruit for added flavor.
Step 3: Add room temperature water (see Step 1 for ratio) and stir the mixture.
Step 4: Cover the jar with a paper or cloth towel and hold it with a rubber band. Store the jar out of direct sunlight and in a cool place with a stable temperature to ferment for 24-48 hours. Strain out the grains afterwards.

MILK KEFIR
Step 1: Get a tablespoon of kefir grains for every cup of milk you want to add and put it in a jar.
Step 2: Add room temperature or cool milk (see Step 1 for ratio). Use raw or whole milk.
Step 3: Cover the jar and store it as in the steps for making water kefir. Let it ferment for 24 hours, or until it takes on a thick consistency and a little bit of whey forms at the bottom. Strain it and drink.
There are many more ways you can prepare and enjoy kefir at home, so why not try and experiment with it, using it as an ingredient for your favourite recipes.