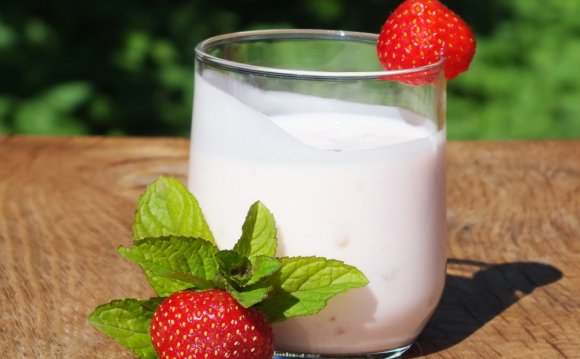 Kefir yogurt is a drink prepared from fermented milk. It has a tangy, mild flavor and is naturally fizzy due to carbon dioxide produced during fermentation. Sold commercially under the name kefir, the beverage is similar in nutrition to traditional yogurt, but it is produced differently and has a much thinner consistency. Kefir was originally made by Eastern European shepherds traveling in the Caucasus Mountains. The shepherds named the drink after the Turkish word for "good feeling" since they believed that kefir had a beneficial effect on their health. Modern scientific research confirms that kefir contains compounds that may help treat or prevent certain medical conditions.

Kefir is produced by allowing a combination of milk and kefir grains to ferment. Kefir grains do not contain grain. Instead, kefir grains is a colloquial term for a mixture of bacteria and yeast. A variety of bacterial strains are present in kefir grains, including Lactobacillus, Streptococcus and Acetobacter. The yeast ferments the simple sugars in the milk, producing carbon dioxide and a negligible amount of alcohol, while the bacteria ferments the milk sugar lactose. Some types of commercially produced kefir are supplemented with vitamin D, vitamin A and natural dietary fiber.

Plain kefir prepared with a combination of nonfat milk and pasteurized, cultured whole milk contains approximately 150 calories in each 1-cup serving. One serving is an excellent source of calcium, supplying 30 percent of the US Department of Agriculture's recommended daily allowance of calcium for healthy adults following a 2, 000-calorie diet. Vitamin-fortified kefir products also provide significant amounts of vitamin D and vitamin A. If you are concerned about your intake of saturated fat and cholesterol, choose low-fat or non-fat versions of kefir. These types of kefir contain all of the beneficial nutrients of the whole-milk beverage, but with much less - or none - of the 5 grams of saturated fat and 30 milligrams of cholesterol in traditional kefir.

Kefir's effect on health stems primarily from its high concentration of beneficial bacteria. Also known as probiotics, the bacterial strains in kefir may help treat digestive system problems like diarrhea, gas and constipation, says Linda Aninoro, a registered dietitian with Brigham and Women's Hospital. The National Kefir Association reports that regularly consuming kefir may help prevent yeast infections in women and promote weight loss. A 2008 study published in "Clinical & Experimental Allergy" indicated that hay fever sufferers who drank probiotic-rich beverages like kefir experienced a decrease in the severity of their immune response to grass pollen. Another study, conducted at the Australian Institute of Sport, found that long-distance runners supplementing with Lactobacillus fermentum, a bacteria found in kefir, recovered from respiratory infections faster than athletes not taking probiotics. Despite its potential benefits, do not attempt to self-treat any condition with kefir before speaking to your doctor.

According to Antinoro, kefir is superior to traditional yogurt because it contains a significantly higher concentration of probiotics per serving. While one serving of yogurt may provide four or five different probiotic strains, several popular commercial brands of kefir boast up to 12 different bacterial strains. Unlike yogurt, kefir can be used as a substitute for milk in smoothies, baked goods, with cereal or any other dish where milk is used. Since the wide variety of bacteria in the kefir helps break down lactose, it may be easier than milk for lactose intolerant people to digest.