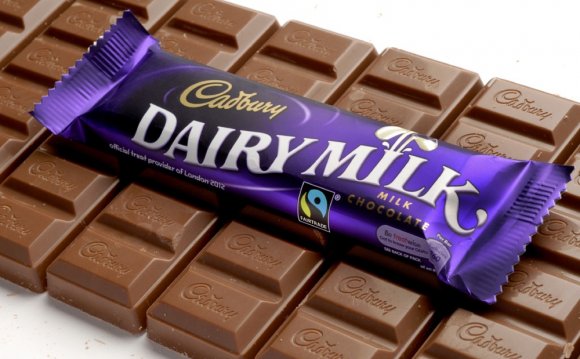 UK vs US Cadbury Dairy Milk

There’s been a bit of chatter about Cadbury over the past few months. First, Cadbury is going Fair Trade with their most popular product, the Dairy Milk bar. Since the bar is the United Kingdom’s #1 selling bar with $852 million in sales buying only fair trade cocoa will make a huge difference for cocoa growing regions. (It’s also #1 in Australia and India.)

The second bit of news is that Kraft, the global food powerhouse that owns not only a large corner of the cheese food world but also Toblerone, Terry’s Chocolate and Cote d’Or, made a bid for Cadbury.

Cadbury has chocolate factories all over the world and each one has slightly different local takes on the product. Here in the United States the Cadbury Dairy Milk products aren’t even made by Cadbury, they’re made by Hershey’s under a licensing agreement. (But it’s not like Hershey’s even makes it from scratch, the major raw material of the chocolate crumb - a mixture of dried milk and chocolate - is shipped to Hershey, Pennsylvania to be combined on site with sugar and other ingredients to form the end product.)

I thought it was high time to compare these two different recipes. So I found the closest products I could to compare.

I found a nice single serve block of Cadbury Dairy Milk from the UK. It was in marvelous condition and looked like it had been stored well at the India Sweets & Spices where I shop - it’s kept at the end of the produce section in the refrigerated area - so it’s climate controlled.

I also picked up a few of the super cute Dairy Milk Buttons, which are little chocolate disks.

For the American version I found a nice back of Dairy Milk Miniatures from Hershey’s Signatures line.

It’s apparent when putting them side by side like this that the American made (on the left) is darker than the UK made one (on the right). What I liked about these two products is that they single pieces of each were similar shapes & thickness.

Both have a nice sheen and are well molded.

The UK Dairy Milk Bar features a lovely matte purple wrapper. It’s easy to open, though not easy to close.

I liked the deeply segmented bar that broke easily into pieces. Each is beveled, so it’s easy to snap off and easy to bite.

The bar smells sweet and rather cheesy, like cottage cheese or maybe yogurt. The cocoa notes are sweet, more like chocolate cake than cocoa. In fact, but those together and the closest I can get is this smells like a rich chocolate cheesecake.

The melt is thick and sticky; it’s sweet at first but then gives way to some deep toffee and caramel sugar notes. Then it gets sweet again ... a bit too sweet for me. After two pieces my throat was burning and I had to drink some water and eat some plain crackers.

The melt is consistent. Quite smooth but not silky or buttery. It didn’t feel fatty, it felt fudgy - like the sugar wasn’t quite integrated with the cocoa.

The dairy notes were decent, a little thick in the back of my throat but not as powdery tasting as some other European style milk chocolates.

Overall I would have preferred a much smoother & more chocolatey punch. However, that’s not what the Dairy Milk bar is about, it’s about the milk component as much as the chocolate, since there are near equal proportions. Milk solids clock in at 23% and cocoa solids are 20%. There are also about 5% vegetable fats in there taking the place of cocoa butter.

This is why the front of a Dairy Milk bar doesn’t even say chocolate - they’d have to put the vegetable statement on the front along with it by their current labeling standards.

I wanted to be as thorough as I could, so I also tasted a package of Dairy Milk Buttons which are kind of like Hershey’s Kisses in that they’re little nibbles of chocolate.

They’re about the diameter as pennies (though some were dime or nickel sized). The bottom has a little embossed Cadbury logo.

Each little piece is rather thin, so melts quickly on the tongue. They release the flavors quicker and taste more milky to me. There’s also a slight cool effect on the tongue.