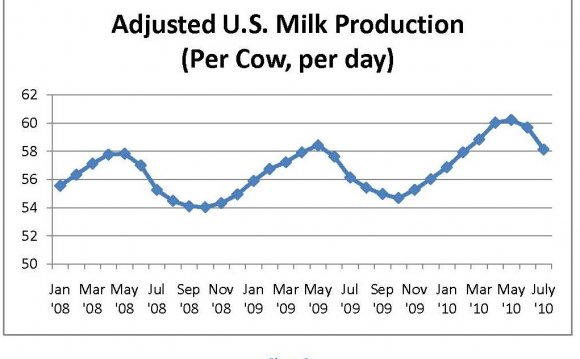 The record low temperatures seen in the 2013-2014 winter taught many livestock producers some hard, cold lessons.

According to Steve Hilberg, senior climatologist with the Midwestern Regional Climate Center (MRCC), the severity of last year was reminiscent of winters several decades ago.

“Last year compared in many areas to those winters in the ‘70s and early ‘80s, ” Hilberg said. “More recently we haven’t had that — winters haven’t been that bad. Last year is what we would categorize as a severe winter in many areas including Ohio. Severe winters are categorized as being in the top 20% of severity.”

When looking at the reason for the temperature drop, Hilberg cautions the overuse of the term “polar vertex.”

“It’s not quite as simple as polar vortex makes it sound, but there is a change in the jet stream that generates that kind of cold weather, ” he said. “Last winter, and if you look back at the upper air patterns of the late ‘70s and early ‘80s when we had those bad winters, what was very common was an area of strong low pressure aloft over Canada and the Hudson Bay area. That creates a large trough over the Eastern U.S. On the west side of the trough, winds are out of the northwest, which brings that cold air straight out of Canada and the arctic into the central U.S. That’s basically what happened last year and this often is a semi-permanent feature during the winter. What happened last year was we just had a shift in the jet stream, which funneled that cold air straight into the Midwest.”

A glance at farms across the state saw all manners of livestock operations affected, though few as much as Ohio’s dairy farmers. The physical and unrelenting schedule of dairies made the extended period of low temperatures particularly difficult. A change in protocol and approach with these animals, their surroundings, and the milk production process in general is essential when the mercury drops.

“Last year — there are no words to describe it except for brutal, ” said Kristy Ackley of Ack-Lee Registered Holsteins outside of East Liberty in Logan County.

She said that even short blasts of those cold temperatures are negative for dairies, but last year’s coldest temperatures revealed that operations in the Buckeye state were not used to, or designed for, those conditions.

“When cold weather goes below freezing for two or three weeks, it just gets really long and tiring on the employees and everybody that has to deal with the cattle, ” she said. “We made it through. This year we’ll muster through like we did and hope and pray it doesn’t get as bad as it did last year.”

Calf care is one of the more important areas of focus during severe cold spells.

“We feed the baby calves out of huts. On the windy days, we boarded them up and put straw in front of the huts, so it was tiresome. On the sunny days, you take the straw out, for the cold days you put it back in. It drug out quite a bit last year, ” Ackley said. “When it does get really bad, I do throw a third feeding into the baby calves with electrolytes just to make sure they have energy and enough to sustain their weight through the cold weather.”

“Last year there was a lot of thawing of the water fountains to make sure the cattle still had fresh water, ” she said.

Dairy farms in the northern U.S. are often equipped with heated water troughs, a luxury that many Ohio farms don’t have. Cows require 25 to 30 gallons of water daily and a change in that system could mean an upset in bovine health and milk production.

It is also important to watch the area surrounding water tanks. An overflow of water due to a frozen switch can result in icy flooring — dangerous to both cows and farm workers.

Fresh water compliments good nutrition for the animals. Ack-Lee Registered Holsteins keeps a focus on nutrition year-round, with extra emphasis during the winter months. Rations need to be adjusted in relation to the temperature in order to compensate for energy lost when keeping warm.

Maurice Eastridge, a professor and dairy Extension specialist at The Ohio State University, reinforced the importance of proper care during low temperatures.